I guess to reassure everyone that I’m ok. I’ll be out of action for a little while, whilst I try to get to the bottom of what caused my problems during the race but I’ll be back stronger and better prepared for having endured what I went through on the streets of Jonkoping!

I’d never been more excited in the days leading up to a race. It was going to be my first official Ironman 70.3 race and it was our first time in Sweden. The scale of the whole event dwarfed most other things I’ve been involved with for the way it took over the whole community. ITU and ÉTU championships are great and have brilliant atmospheres but the excitement around the town of Jonkoping for their first ever Ironman event was captivating and a privilege to be part of. 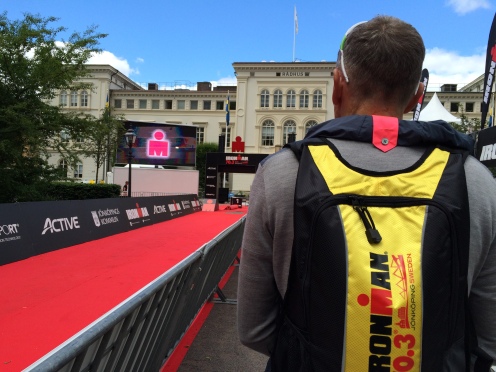 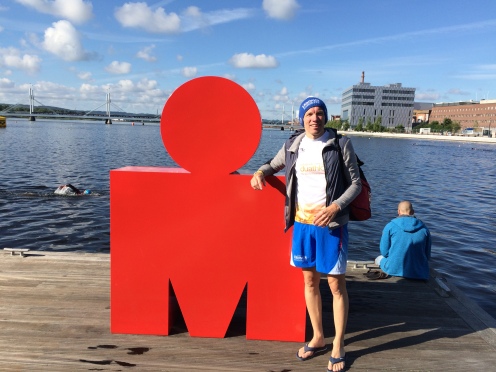 I felt ready and my performances over the previous couple of weeks suggested I was hitting a peak level of fitness and form just at the right time. This was the race I’d been looking forward to all year and I had a well of confidence that was building inside.

We arrived in Jonkoping a couple of days early and had a chance to look around. It’s somewhere that we would never think of coming to unless it was for a race and I’m so glad that we’ve been. The setting on the enormous Lake Vattern is stunning and for a town of less than 100,000 it has amazing facilities for its people (and having visited the inside of its leading edge hospital it was like being transported into a very bright future compared to our overstretched NHS ). We enjoyed a relaxing day exploring the bike course which took us through some stunning countryside, stumbled across a fabulous restaurant for lunch and most importantly took even more confidence from the terrain. The toughest section was over the 1st 40km and so once I’d ridden this as practice I knew how hard to push to ensure that I could really go to town over the second half. Confidence was building even more. 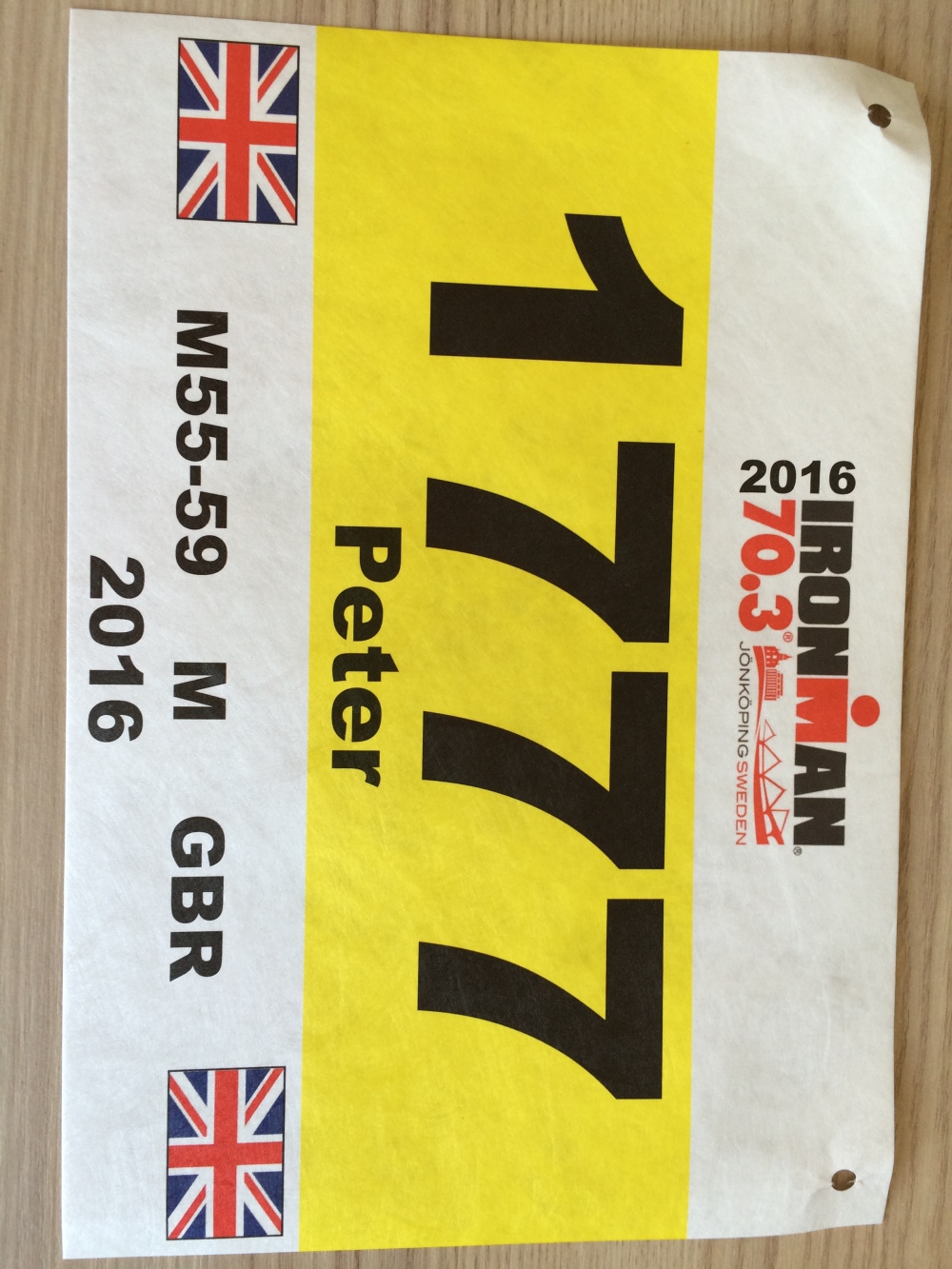 Race day arrived and the conditions were pretty much perfect. It was cool, overcast and the high winds of the previous days had dropped to simply a steady breeze. It was going to be a memorable day.

The added complications of transition with red and blue bags and changing tents all seemed to be falling my way as I had the ideal slots at the end of racks and would have no problems finding my things. The stars were aligning beautifully! 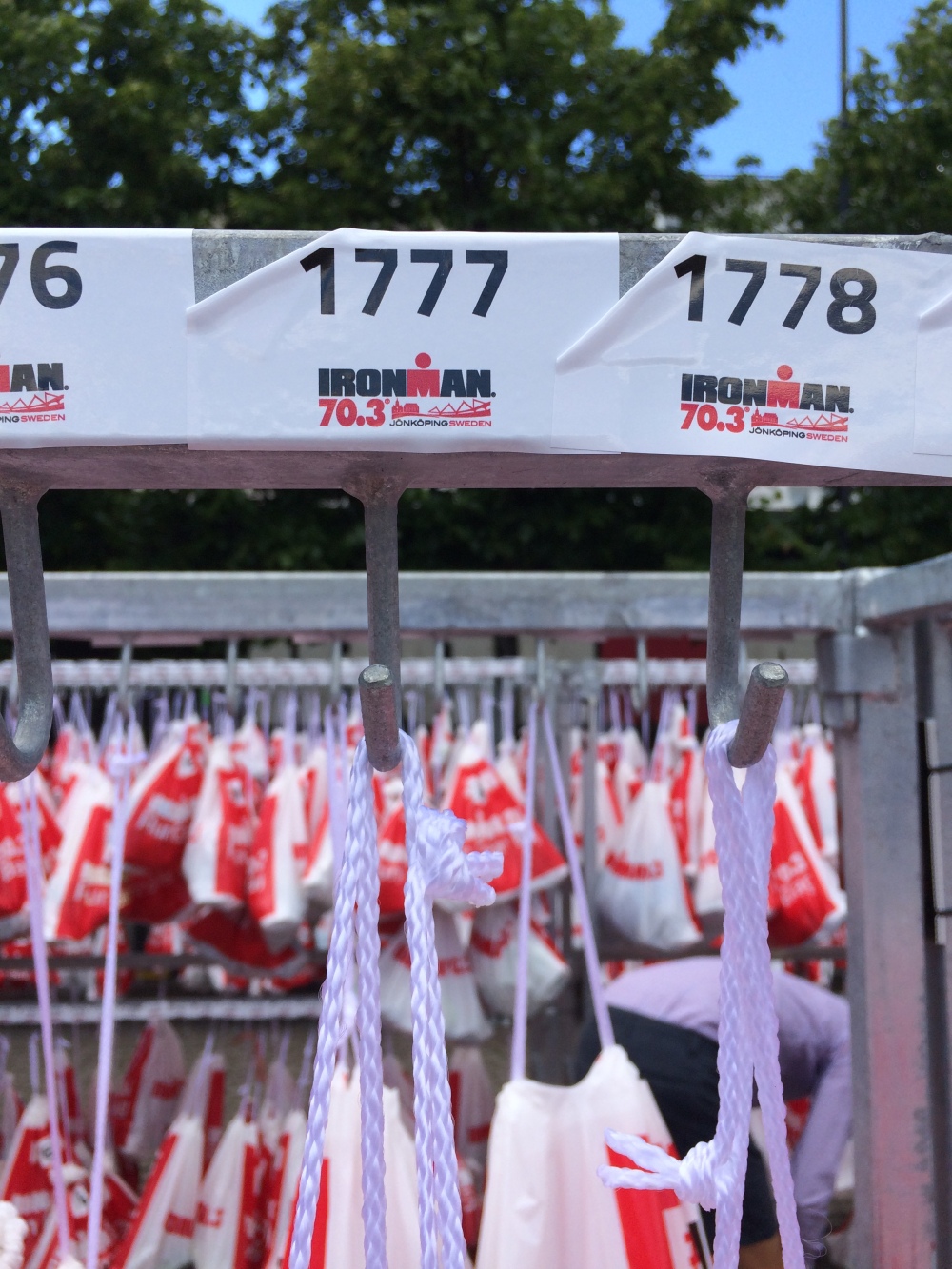 A short warm up swim calmed me down and helped get me in the zone for the start. An enchanting rendition of the Swedish national anthem just before the Pro start brought a tear to my eye and reinforced what a special day this was going to be. 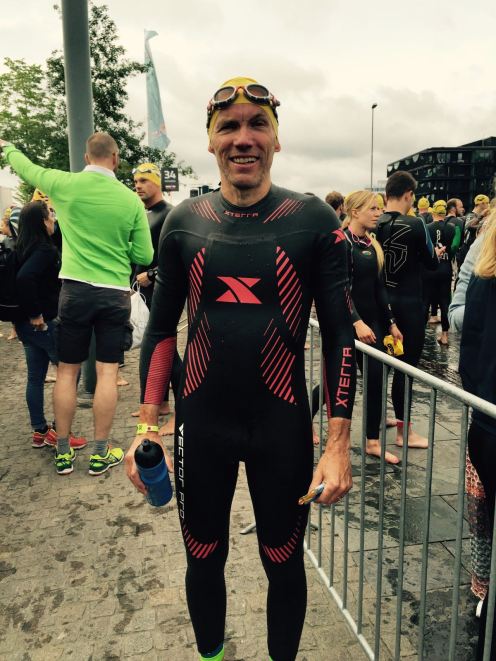 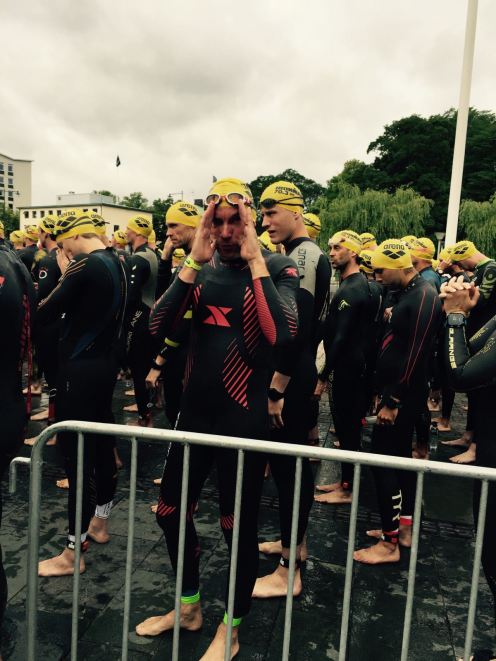 Ironman races seem to begin with a rolling start to minimize the washing machine effect and so the 2000 competitors slowly edged their way to the start line with 4 swimmers at a time being released down the ramp and into the water.

The swim course could not have been more straight forward. Up the lake for 900m, turn left for 100m, turn left again and swim back for 900m. Easy. I swam ok and did not get passed by too many others. The last 400m was hard as I was beginning to get a combination of tired, bored of swimming in a straight line with nothing else to think about and a tad anxious that my heart rate was a bit high. I was glad to reach the swim exit and pleased with my legs as they got immediately into a smooth run along the blue carpet towards transition.

My thoughts now turned to getting out of the wetsuit. Would I be able to execute this today or struggle as I’ve been doing recently?  Zip down, Velcro released, out popped my shoulders and my arms were out without any drama. Easy. “Can’t wait to tell Annie” I thought as I ran towards T1.

It must have been 800m to transition and so plenty of time to take stock of how I was feeling. My most over-riding thought was that my heart was still racing and this felt very odd and so I tried to breathe deeply and slowly to bring it down, without any joy.

Once into T1 I grabbed my bike bag and headed into the tent. Wetsuit was removed seamlessly, helmet on quickly, swim stuff put back into the bag and away I went, dropping the bag into the big bins en route to my bike. There seemed to be plenty of bikes in my area which is an encouraging sign of my swim progress and off I went. As I got into my riding I was still very aware of just how high my HR was and so I continued to focus on slowing down my breathing to get it more under control.

I then settled into a strong TT position for the first few kilometres as I headed out of town towards the 1st big climb. I’d practiced this climb and so was pleased to find that the gears I thought I’d need were the ones that I used. This race was going to plan. I reached the high point of the bike course in good time and then felt it was time to push on. I’d been taking plenty of fluid on board and swapped a bottle for a new one at the 40km feed station.

During the 2nd half of the bike things began to unravel. I was getting distracted by strong sensations of the need to pee and yet I couldn’t manage it. This was creating tension in my body and I felt an increasing need to get out of the aero position and stretch off a bit.

I was pleased to get back to T2 and get on my feet again as I thought this would unlock my ability to pee once I got going. I had a good transition and flew out onto the run course feeling momentarily invigorated. My legs felt great and I thought I was about to put in a strong run. However after 200m I suddenly felt odd and vomited in full stride. It seemed like the gels I’d been taking throughout the bike course had been rejected by my body. My stomach was churning violently and I had to slow down and hang on for the 1st aid station. I made it and felt a bit better after a visit to the toilets but was still concerned that I hadn’t really managed to pee properly. Despite this, I thought that I needed to get some water inside me to help dilute the gel concentrations that were probably still sitting in my stomach. I was now feeling pretty rubbish but concocted a plan to jog between the aid stations and walk whilst taking on bananas and water until i felt better. However, everytime I tried to increase my pace I felt the waves of nausea returning together with an increasing frequency and intensity of the need to pee ( but I simply couldn’t).

So I now had a choice. Do the sensible thing, pull out and accept its not my day or battle on and reach the finish line?

I kept hearing the voice of the race director in my head explaining that the finisher medal was the same for the pro’s as it was for the age groupers. I wanted that medal and the worse I began to feel the more I wanted that little bit of metal on the end of a yellow ribbon. Getting that medal drove me on, even though I was getting slower and slower.

As I passed Kathy on each lap I stopped to reassure her that I was ok, even though I was becoming increasingly aware of how much I was struggling. To her credit she didn’t once try to get me to pull out but just gently asked me to re-evaluate each time. To me this was a critical moment, a test of how well I understood my limits. I wasn’t going to put myself in danger but I did want to see how much I could suffer in the pursuit of something I wanted to achieve. I had plenty of time ( two and a half hours on that run, if you can call it that!!) to listen to my body and assess what was going on. I had a pretty good idea that this was a recurrence of a urine retention problem I’d had last year and it would probably end up with a visit to hospital but in that moment I just had to believe that I could reach the finish line.

On I went getting slower and slower. The encouragement from the crowds were overwhelming and small children almost brought me to tears with their words of support in perfect English.

I finally crossed the line 3 minutes short of 6 hours to proudly receive my finisher medal. I knew deep down that I needed to find a medic quickly but it took Kathy’s arrival to make me do it. I was put straight into an ambulance and taken to the hospital where a brilliant team were waiting to sort me out.

Total relief. Total admiration for the skills of these people.

5 hours later, following a series of tests I was allowed to leave, still proudly wearing that Finisher medal. I feel huge gratitude to the whole team who helped me at Jonkoping Hospital.

Ironman 70.3 Jonkoping did not work out the way I’d hoped or planned but I loved the experience, loved the weekend in Sweden and it will most definitely rank very highly in terms of my most memorable races!

As ever, thanks for the continued support of Erdinger Alkoholfrei, thanks to Coach Annie for all the guidance and preparation and thanks to Kathy, friends and family for all the love shown to me.