What a cracker of a race!

The Chatsworth Estate is an inspiring venue for a race right in the heart of the beautiful Peak District, and when coupled with a still, sunny early morning it created a magical environment that more than made up for the fact that all bikes had to be racked and ready to go by 6:30am (despite my start time not being until 8:20am).

After the torrential rain of the previous day, the race village was pretty wet, but the roads had dried up nicely and the conditions were set for great racing.

Xtramile Events, the race organizer are very good at putting on a race and when it became clear that there was congestion trying to get 1000 competitors onto the site between 5:30 and 6:30 a.m they dealt with it all very quickly and put the start of the race back by 15 minutes. It’s not what they did, but the calm way that they did it that seemed to relax everyone and prevent any unnecessary stress so early on a race day. Well done Xtramile.

Today I was racing the sprint as a warm up and a bit of speed training before my next “A” race (Ironman 70.3 Jonkoping) in Sweden next weekend. This season I’ve used a similar strategy to prepare for my other “A” races and its proved successful so I was hoping to keep it going.

Given that I had 2 hours between racking my bike and my start I was under no pressure and took things very gently. It was great to catch up with Erdinger Pete and Cath and have a warm up with fellow Erdinger team-mate Garry. All was going well as I went back into transition to put on my wetsuit and get ready for the swim start. However, the zip on my trusty Erdinger tri suit jammed and wouldn’t zip up. Despite the help of the full Erdinger crew we couldn’t dislodge it and so had to improvise so that I could start. It’s amazing what a few safety pins and some packing tape can do! 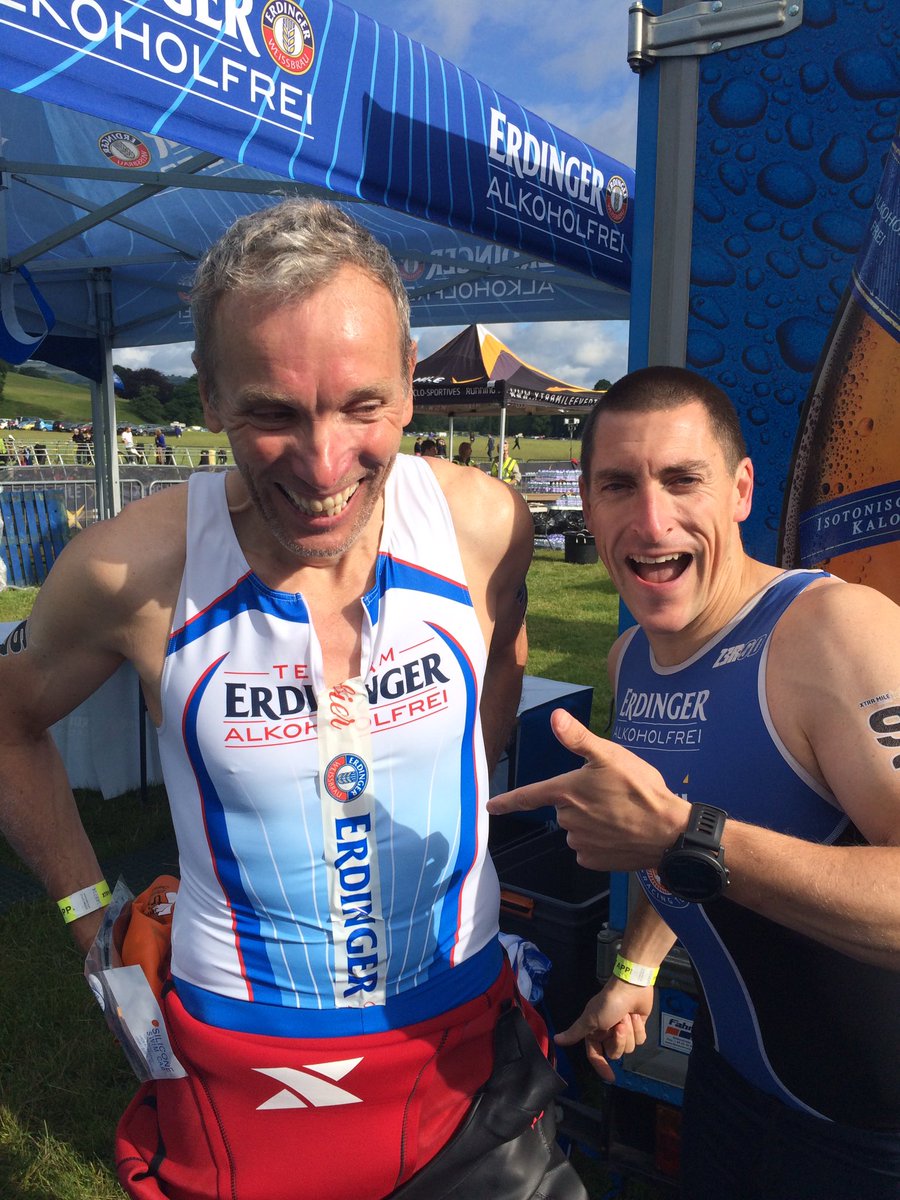 Relieved, I headed off to the swim start arriving just in time for my wave to enter the water. 12 degrees was mighty bracing and the 60 second wait for the start gun seemed like an eternity.

Once we got going I forgot about how cold the water was as I was too focused on trying to find a small amount of it that I could swim in. It was so crowded and the River Derwent through the Chatsworth estate is fairly narrow and shallow at the edges so the swimmable channel was limited to say the least. The downside of improving my swim speed is that it takes a lot longer for me to find any clear water and it wasn’t until we got to the turn buoy at 375 m that it seemed to settle down. The good news though is that my improving technique now gives me the confidence to hold my lines and fight for my position in the water. I’m definitely getting there. I felt like I swam well on the return and was soon exiting the river to head back up the field to transition, dodging the sheep pooh along the way!

My new wetsuit has proved tricky to get off to date and today I probably had more challenges than before. During the run back to T1 I would usually have the upper part of the wetsuit off ready to kick it free from my legs as I get to the bike. Today however I didn’t manage to get it off my arms and ran into transition with both arms trapped. So I lost time doing my Houdini impression and then made things worse by getting the clasps on both my helmet and race belt stuck. 1:51 in T1 was not v impressive and probably cost me all the time I’d made up through swimming faster! Heh ho, at least this is something that should be easy to correct and then I’ll be really hunting down the fast swimmers.

Out onto the bike I went. Today, we were being given special access to the private drive of the Devonshire family which led us alongside the river and out onto the public roads. I don’t know what they have been doing on this road but it was covered the whole way with a thick layer of, what I assume were, animal droppings. By the time we reached the road my bike was coated in this thick slime….nice ( 1st job when I got home was to give my flying machine a good clean!).

After 3km we entered the village of Beeley and headed up the 3-4km steady climb to the top of Curbar Edge. This was my kind of climb as it was not too steep and by tapping out a nice cadence I went past dozens of fellow competitors. Over the top I went and slotted straight back into the big ring and found a superb rhythm that powered me all the way back to Chatsworth. Even the section of road on the return that had its top layer skimmed off didn’t cause me any issues as I decided to take my lead from the Paris-Roubaix boys who talk about going hard to skim across the cobbles. It worked for me and I was soon arriving back at T2. There was a long run across the sodden fields from the dismount line and I was feeling very pleased with my decision to race sockless for the 1st time. Bare feet dealt with the mud and puddles very easily. A much quicker T2 got me back out and onto the run course. This was a brute. It’s all off road on a combination of muddy paths, fields and rough tracks. Its 2.5km up hill and then 2.5km straight back down again. The ascent is a leg burner, pace is irrelevant its just about getting to the top in one piece so that you can then let it all go on the way down.

With a thousand competitors on the course at the same time it created a great atmosphere on the run as friends and family generated lots of noise and encouragement.

I crossed the line smiling from ear to ear in 1:19:34, after a 23:14 run which is the slowest 5km time I’ve recorded for a long time. But this is not a fast course. Its got long transitions and each of the 3 legs has its own special challenges. So the time doesn’t matter here, it’s the experience that counts and this is what makes it a very special race. I had a real buzz and spring in my step.

As I helped out pouring Erdinger for all the finishers I could see that it wasn’t just me that thought this was such a special race. Everyone was smiling, exhilarated, swapping stories of their own race and their own interpretations of the brute of the hill at the end, the shock of the river, the challenge of the bike course. I think they’ll all be back again.

Well done XtraMile for putting on such a great event. Huge thanks to Erdinger for their continued support to me and especially today for the running repairs that got me to the start line.

Oh, and I later found out that I finished 2nd in my AG and given that this was a 2017 European Champs Qualifier and therefore attracted a pretty high quality field it shows just how much I’m improving as a triathlete.

What great preparation for next week. If I can get my wetsuit off (and wear a trisuit that works), who knows what I might be able to do !