Welcome to my blog.

The purpose of this blog is to share what I’ve learned about how to turn dreams into reality and hopefully, along the way, inspire a few people to go and chase their own dreams.

Now, I’m just a regular fella who turned 50 a few years ago and almost overnight decided it was time to start believing in myself.

My first 50 years were very happy, working really hard to build a great career, a loving family and some amazing friends.Mixed up within the hard work, I also spent much of my first 50 years dreaming of being a sportsman, whether that was to be scoring the winner at Wembley, sinking the final putt on 18th at Augusta or receiving an Olympic gold medal in 1500m. The problem is that I just didn’t believe that things like that happened to regular guys and yet on a regular basis these dreams became frustrations and like an itch that just can’t be scratched they wouldn’t go away.

Becoming 50 was a turning point. I realized that the difference between dreaming and achieving is belief, commitment and lots and lots of practice. I decided it was time to go for it. I was going to become a World Champion sportsman .

This guy is crazy, you are probably thinking but please suspend your disbelief and bear with me.

The world, society and our education system all seem to conspire to put limits on us. One of the most obvious limiting beliefs is that 50 years of age is too old to become a sportsman. Well, let me tell you that doesn’t have to be the case.

5 years later I was picking up a gold medal as World Duathlon Age Group Champion.

I’m now confident enough to describe myself as a sportsman, I train each day, I’m still getting faster and I’m setting myself scarily challenging goals.

If you’ve always dreamed of doing something, but struggled with the confidence and belief to go for it, then please stick with me and lets see if my ramblings can help inspire you. Dare to try.

It’s December 10th and I’m lying in my sick bed for the 1st time all year. The dreaded man-flu has caught up with me and so I’m doing what doesn’t come naturally, the smart thing and dealing with it! I’m now starting to feel better and thought it would be a good moment to reflect on the season.

My ambitions at the start of the season, my first as a Erdinger Alkoholfrei sponsored athlete, were:

To represent GB AG team at triathlon for 1st time

So two of my three ambitions related to triathlon rather than duathlon and this in itself was quite scary as I enjoyed such a phenomenal year in duathlon in 2014 and it would have been totally justifiable to have focused on reinforcing my performances over the sprint distance again this year. Instead I wanted to take myself completely out of my comfort zone, by having my season defined by swimming as much as my strengths of running and cycling. And even my growing belief around my ability in duathlon was to be severely tested as I was to race double the distances.

Why make it easy?

Over the last few years as I’ve begun to take racing and training more seriously, I’ve been eager to learn from Pro’s about what they do and how they do it to make themselves successful, as I believe that (other than a handful of exceptional individuals) winners aren’t simply born. If we want to succeed then what is the key? Consistency of preparation is the answer I’ve heard more frequently than any other from Pro’s. So, consistency in training and consistency in recovery have been the things I’ve been trying to achieve this year (and for someone who has always feared getting into a routine this has been a difficult challenge to embrace).

So how have I got on? The training numbers look pretty encouraging I believe

380 quality sessions were completed leading into my final race in October, with more swim sessions, 140, than ever before. Massive thanks to Annie, my coach for putting together the ideal programme to build my fitness and get me ready for each and every race.

Only a handful of run sessions were missed through a stupid injury, playing cricket!

No time was lost through illness until this week.

Weekly sports massage has definitely been key to enabling me to be so consistent, so huge thanks goes to Charlie my masseur. Also, the expertise of Dr Will at Endurance has monitored my blood levels throughout the year and helped me to tweak nutrition at times to keep me in tip top health.

My early season form was encouraging. I smashed out a PB over half marathon distance in February, clocking under 87 mins and performed well in the Oulton Park March duathlon ahead of the European Duathlon Champs in Alcobendas, Madrid. This was the 1st of my 3 championship races of 2016, all of which brought their own challenges. Here it was the weather. An outrageous storm blew in on the morning of the race, making the bike course treacherous. I was delighted with the way I plotted my way through the race, given that I’m still pretty nervous cornering after my crash in 2013. To win silver was huge. It gave me a real boost of confidence that I’d made the right decision to step up from sprint distance. I now believed I could be a contender at this longer distance. 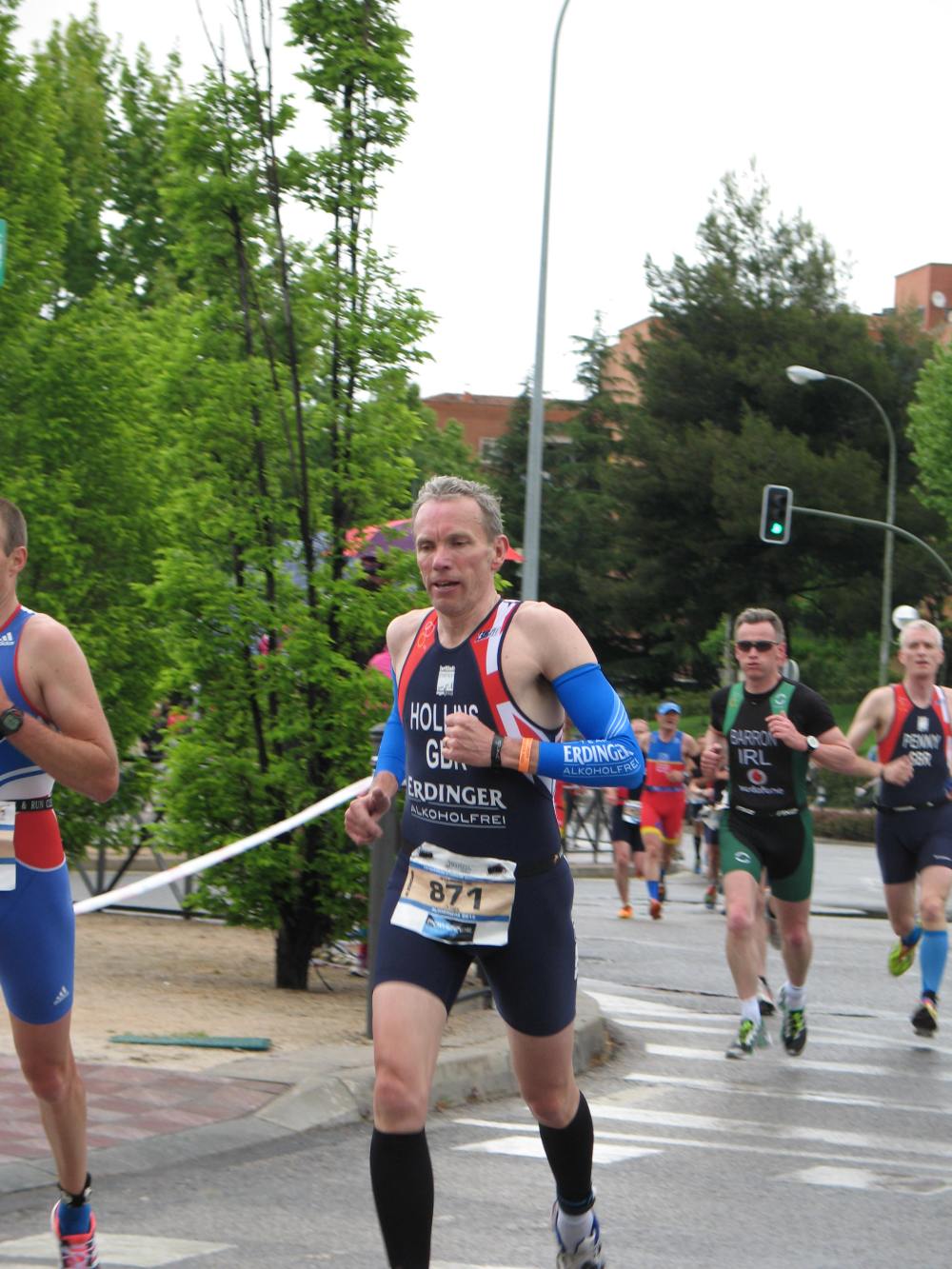 After Alcobendas it was time to switch into triathlon for the summer. My first race was a sprint in Nottingham, where there was a large and high quality field. So I was delighted to pick up 3rd place. I then had my best swim spilt to date in the deva tri in Chester where I knocked out a sub 27 min 1500m to set me up for my best ever time here. Again it was a very strong field as it was the English Champs and I got 9th place. This was a bit of a reality check as despite a huge improvement in the water I am still too far back to give myself a chance of winning as the top age groupers just don’t have a weakness in either bike or run that matches my (current) swim deficiency. Heh ho, its all work in progress and I’m improving.

On we went to the next major championship, the European Triathlon in Geneva. The location was beautiful, the atmosphere was electric and the scale of the event was another step up from the duathlon champs. I knew I was here for the experience, but I didn’t expect to be let down by my two strong disciplines. When I got out onto the bike I had no power in my legs and continued to struggle right through to the finish. It was probably my most disappointing race ever as I felt good going in, but just had nothing to give when it was required and the only thing I can be proud of is that I kept going, didn’t give in and managed to find a way to enjoy the experience.

Its still a bit of a mystery as to what happened but one theory is that I was too fresh, having had a good taper into the race. Maybe driving all the way to Geneva also had an impact on me?

I put this disappointment behind me very quickly as I had the scary challenge of a Middle distance race looming a few weeks ahead. I’d originally set out to complete my 1st Middle at Bala in June, but this race had been abandoned in tragic circumstances with the death of an athlete. At the point the race was stopped I’d been going really well and so I took some very positive thoughts into my 2nd attempt, The Gauntlet at Castle Howard, Yorkshire. I felt like I really bounced back in this race. I loved every kilometer of it, even the final one, where I discovered I had made a crucial elementary error and hit the wall as I ran out of energy stores. Up to this point I had been high up in the top 20 overall and I know that as long as I take on more nutrition earlier in the run then I’ll be able to hold it together for the full distance. Despite this error, I won the age group and think I’ve discovered the triathlon distance that could be the one that plays to my strengths. (We’ll see in 2016!)

I planned to take a bit of a mid season break after my 5 hour middle distance race but was surprised at how quickly my body recovered and so didn’t need quite so long to step back into training.

A couple of average triathlon performances completed the summer before one final duathlon in the build up to the big trip of the year to Australia. This build up race was the 1st ever draft legal AG sprint race in UK. Next year, sprints will become draft legal and so the event at Oulton Park was experimental. I went into it thinking it would be my one and only ever go at this format, but I loved it so much that I think ill try and do a draft legal race for fun each year. The bike leg was such a blast, forming a group and being part of organizing it such that the speed kept getting higher. Despite recording a faster bike split I came into the 2nd run with really fresh legs and smashed out a time that was exactly the same as the first leg. I was buzzing as I crossed the finish line, winning my AG and 15th overall!

Off we went to Australia feeling fit and ready to compete. I imagined there would be some tasty Antipodean athletes that don’t travel to Europe to race and this proved to be correct. The winner of my AG was just too good on the day and his biking was at another level. He has certainly set the benchmark for me to aim at over the next couple of years. I finished the race 4th, only a matter of seconds behind 2nd and 3rd. I could not have done more on the day and was really pleased and proud of my performance. It was my best race performance of the year. I was 8 mins quicker than in Alcobendas in April and I pushed myself to the absolute limit, which is all I ever try to achieve. My bike leg took lots out of me and so I was struggling in the 2nd run but I wanted to discover how well I could cope with the 2nd run on very tired legs. So, I believe that my race execution was good, even if it highlighted how much stronger I’ve got to become for that all important 2nd run. Stepping up to the standard distance was a big challenge which I think I coped with well and whilst coming so close to a medal is frustrating it has actually motivated me even more to work harder for next year. 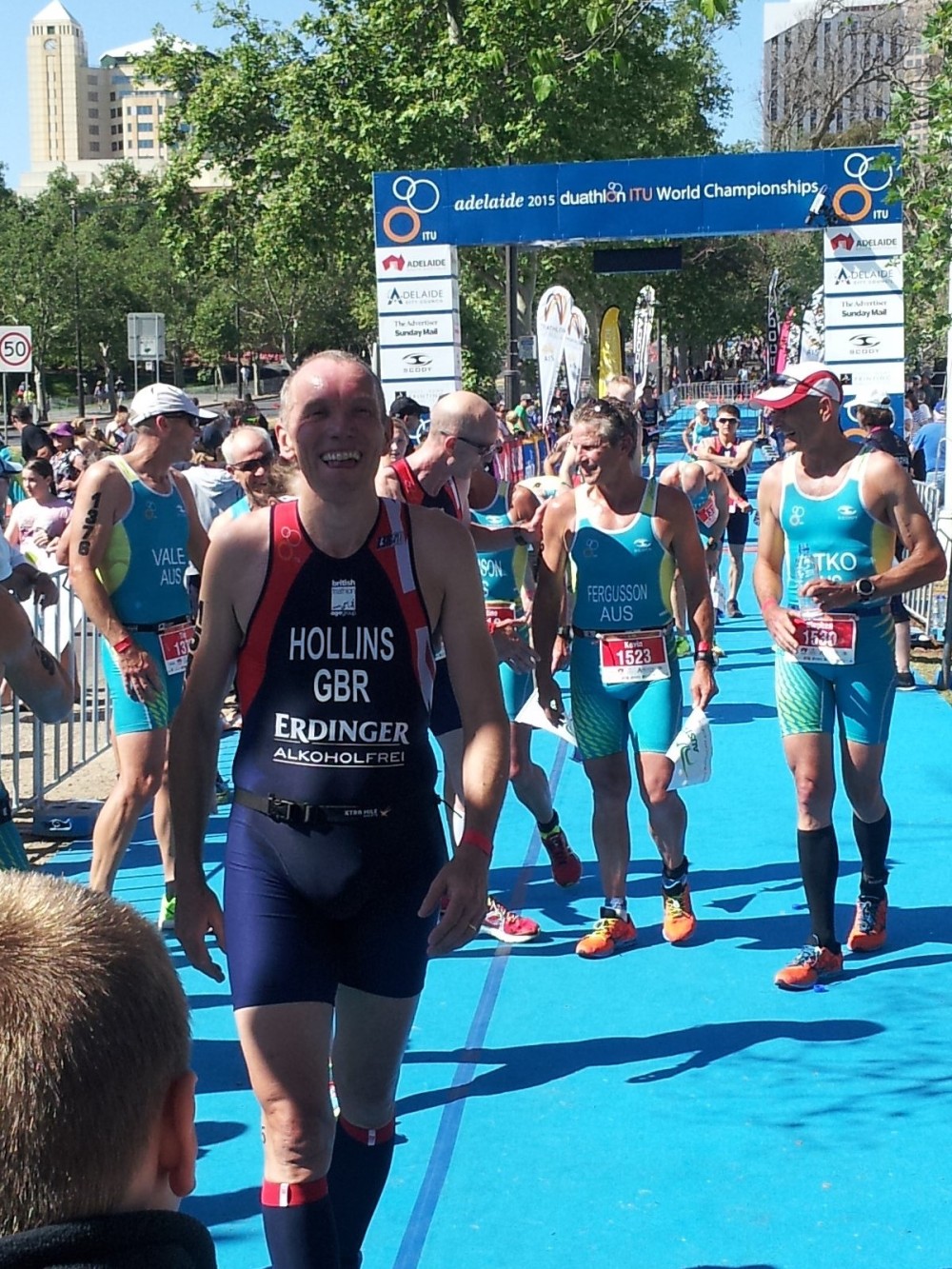 So what a great season I’ve had. I’ve picked up another silver medal in a European Championship, I’ve competed for GB at triathlon and I’ve not only won my AG in my first Middle distance triathlon but my performance should be good enough to qualify for the 2016 European Middle Distance Champs. On top of all that my racing has taken me to the other side of the world where I put in a world class performance. It’s a season to be rightly proud.

I’m really grateful for the support of Erdinger Alkoholfrei as a sponsor and have been proud to race in their colours this year.

Next year is going to be even better…I can feel it already.