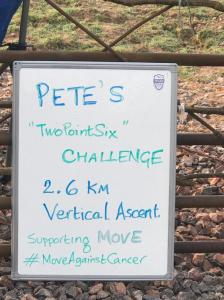 After 5 weeks in lockdown my brain began to play strange tricks on me. With all our upcoming tours postponed and the prospect of racing again in the near future looking unlikely my unconscious self clearly decided that a shock tactic was required.

Last Friday, 24th April I awoke on another beautiful morning in the Beacons with this really clear thought that I needed to get involved with the “Two Point Six Challenge”.

The Two Point Six Challenge is a brilliant initiative to help charities that are struggling with a lack of funding as a consequence of the big mass events such as London Marathon not happening due to Covid 19 risks. People are being encouraged to think up weird and wonderful 2.6 themed activities that can take place within a lockdown environment and inspire others to either donate or get involved themselves.

Now, we have a field behind our house that stretches up the valley side and so I awoke with this vision of me taking on a challenge of some description in our field. By 6am I was out in the field measuring the vertical difference in altitude between the bottom and top of said field. My watch confirmed it as 30 metres. A quick calculation suggested that around 90 laps of the field would achieve a vertical ascent of 2.6 km. Brilliant. This is what I was going to do. The 2.6km Vertical Ascent Running challenge was about to happen.

Sometimes I can tend to dwell on things, overthinking the pro’s and cons, the what ifs. Occasionally this approach leads to indecision and I knew that if I thought about this for too long I would come to the sensible realisation that it was nuts and therefore I shouldn’t do it. This time however, I knew instinctively that I couldn’t allow this rational side of me to dominate.

So I pinged off an email without any further delay to my long time sponsor Erdinger Alkoholfrei to tell them that I was going to join their initiative to support the Two Point Six Challenge. At 8:29 am that email was sent and by 8:50am I had the reply confirming that it was indeed a nuts idea and that I should definitely do it.

The next question was who should I do this crazy challenge for? Well, Lucy Gossage, an amazingly talented triathlete and more importantly brilliant cancer doctor is the founder of 5k Your Way, Move Against Cancer. This is a really small charity that has suffered a loss of funding from the consequences of social distancing and cancelations of events.
MOVE is all about encouraging cancer patients and their families to keep physically active as there is growing evidence that a healthy lifestyle during and after cancer improves both physical and psychological well-being. This aligns perfectly with my own personal philosophy and given that a number of my dearest friends and family have been battling different cancers over recent times it felt like the right charity to support.

I set up a fund raising page at https://www.justgiving.com/fundraising/peter-s-2-6-challenge1467 and then spent the rest of the day contacting lots of people I knew to tell them what I was about to do. The reaction was just what I’d hoped it would be: lunacy, madness, nuts, crazy were the typical adjectives of support.

On Friday evening I felt energised and excited but then it dawned on me that I hadn’t actually done any training specifically for this. I was really fit and the impact of the 1st 3 weeks of lockdown doing Jake’s Giro on a turbo trainer had left me being stronger and having a significantly higher Threshold Power level than ever before so I knew I was in pretty good shape. But its not normal to take on such a mammoth challenge without doing at least a small amount of specific preparation. I’m 60 years old, I’ve had cruciate ligament reconstruction, I’ve got very little meniscus left in my right knee to act as a shock absorber and yet here I was planning to spend upto 8 hours going up and down a 20% gradient hill in just over 24 hours time.

Before I continue I just have to plug Jake’s Giro. Go check it out (https://grintacoaching.co.uk/jakes-giro/ ) it’s a brilliant activity for cyclists who are looking for something to focus on during this difficult period of lockdown and its an even better way of step changing your cycling performance. For example I moved my Threshold power from 269w to 292w during the 3 weeks. That is a remarkable progression.

Anyway, back to the challenge. I’m a really experienced triathlete so I know how to focus on the positives and I needed to trust in my ability to adapt and react to whatever the hillside was going to do to me.

I knew that 90 laps was going to create mental challenges as much as physical ones so we created a scoreboard that would allow us to tick off the laps and recognise progress as I got into the meat of the challenge. We also identified lots of Mountain passes that could be used as virtual milestones along the way:
Gospel Pass, the highest road in Wales came first at 549m, then Pen Y Fan, the highest mountain in Southern Britain at 886m. Ben Nevis is 1345m and then we got onto some iconic cycling cols with Alpe D’Huez 1803m, Ventoux 1912m Tourmalet 2115m, Pordoi in Dolomites at 2239m, where we take groups with our Compagnons Cycling business , Mount Teidi in Tenerife at 2356m and finally Galibier at 2642m.

So at 7:30am on Sunday 26th April, just 49 hours after dreaming up the challenge I began the first ascent of our field. The first 3 hours flew by. It felt very comfortable as I was running well within myself. My HR was under control, never getting above 130bpm and coming right down on every descent to around 90bpm. The laps were being ticked off with ease and I reached “Ben Nevis” around 3 hours in. Kathy was doing an amazing job in support, keeping me well fed and watered and jst as importantly keeping me updated with fundraising progress.

We were posting pics and videos throughout the morning and this helped us to gather some interest in the challenge that converted into donations. I found it really inspiring to know that as I was running up the hills it was translating into cash for MOVE.

Around three and half hours in things changed. It went from a crazy idea that was comfortable in its execution to feeling like utter lunacy with each lap becoming increasingly more difficult. The 20% gradient still felt ok on the way up but the steepness of the descent was creating massive microtears in my quad muscles. When I tried to minimise the gradient by zig-zagging the hillside it didn’t help as I was risking achilles irritation through uneven foot placement. So I decided to put up with the quad soreness and continue returning straightdown the hill. 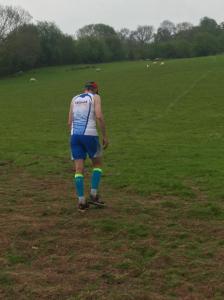 I shot a little video as I went over Alpe D’Huez. This was when things were feeling really tough and I still had 800m of vertical ascent to go. I remember wondering how it will feel if and when I get to do the AlpeD’Huez triathlon. This is due to be one of my big race goals for this year and whilst it is still officially on I’m not sure if it will happen. This “not knowing” is making training very difficult at the moment, so having the madness of this challenge is a really positive distraction for me. 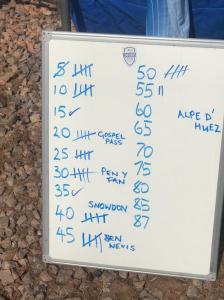 By the time I went over Tourmalet at 2115m I had convinced myself that I was now struggling because of the thin air at altitude! The Tourmalet is one of my favourite cycling climbs and the day I rode it as a very inexperienced cyclist will remain a treasured memory. I used this memory to help me through the laps of our field, visualising the ski stations that you pass on the way up, the way that the valley opens up and the road snakes its way towards the final brutally steep section before arriving at the summit and the monument of a cyclist gasping for air.

Once over the Tourmalet I knew I would make it, even though each lap was taking longer. Teidi at 2356m was another significant milestone. A few years ago I rode from sea level up into the crater of the volcano and remember being proud. I think it’s the longest climb in Europe but its certainly much easier to ride from sea level to 2356m than it is to run that vertical ascent on a hillside in Brecon Beacons.

As the target distance of 2600m approached I got Kathy to walk up to the top of the field to mark our finish line. 6 hours, 34 minutes and 22 seconds had passed when I finally arrived at 2.6km of ascent. I had run 20.74 miles. I was completely exhausted and ready to stop. The Galibier, just another 42 meters higher could wait. I will take a group of cyclists there one day soon and experience it for real, rather than as part of my near hallucinogenic state.

Whilst I was exhausted I was also really happy. It felt like I’d done something useful. And I didn’t quite realise at that time just how appreciative the team at the charity were going to be for my fundraising effort. In just over 48 hours we’d gone from nothing to completing the challenge and raising over £1200 and if anyone reading this feels like adding to the total then I ( and I know the team from MOVE also) will be truly grateful.

My thanks to Lucy Gossage for her inspiring work, to Erdinger Alkoholfrei for prompting this madness, to The Gaffer ( http://www.grintacoaching.co.uk) for his coaching and sage advice and of course to Kathy for her selfless support. Its just another normal day for her!

Sometimes it’s amazing what can happen when you just act on instinct.