This happened for me yesterday. For a while I’ve been dreaming about doing some cyclocross racing, but not having a CX bike or even a mountain bike meant that it remained exactly as an idle dream. Most dreams remain just that because we don’t put a plan together to make it real.

So I bought a bike. A beautiful Merida carbon frame CX bike. I took it out a few times off road and loved the freedom and sense of adventure that it instilled in me. Next, I entered a race. North Wales CycloCross Group organise a series of races throughout the region each winter and the first in the new season took place yesterday in Mold. Mold is only about 15 miles away so I had no excuse.

I rocked up nice and early. Picked up my race numbers, got my bike out of the car and set off onto the field to have a bit of a warm up.

Oh dear. Within a couple of minutes I was experiencing total terror. Narrow woodland trails that could only be reached by heading down steep muddy slopes with 90 degree turns at the bottom. How was I going to control my bike down these? The answer was, I wasn’t. during my warm up laps I ended up in a heap more times than I can remember. I withdrew to the car park to get my thoughts together.

If pottering around slowly was creating challenges that were proving difficult then how would I cope in the heat of the race battle? I was very quickly realizing that riding offroad in deep mud was very different to my usual road cycling. I was way out of my comfort zone, deep in the land of the conscious incompetence and concerned that I may visit unconscious incompetence several times more before the day was out! But, heh I wanted a challenge. I wanted to test myself with some new stuff and it felt like I was being thrown in at the deep end, only this time it was deep mud rather than deep water.

In the hour leading upto the start I picked up a few tips from seasoned racers. “Take the air pressure in the tyres down as far as you dare as this will provide more traction through the sticky stuff” was the technical tip and “enjoy it” was the morale boosting tip. So I set off for the start with a simple goal. Enjoy doing something new.

The race began with a couple of laps around a field to stretch out the 120 riders before heading onto the narrow course. All went well around the field and then we were let loose on the brown stuff. The first 180 degree turn came up more quickly than I’d expected and in trying to get around I took out one competitor going into the corner, managed to stay upright myself for a couple of seconds before colliding with another wheel on the way out. I went down, bringing the wheels’ owner down on-top of me together with several other totally innocent, unlucky riders who just happened to be in the wrong place (ie in my vicinity ). We’d only gone a few hundred yards and I’d caused carnage. Luckily no one was hurt and more importantly nobody took much offence to my incompetence. After apologies all round and I was on my way again. Adrenalin was definitely pumping and we headed across the open field towards the next obstacle, a steep drop down a grassy bank. I think I got down this without incident before creating more mayhem on the next 180 turn. Crikey, this was the only the first part of the first lap and I hadn’t even got to the tricky technical wooded section yet. Simply surviving to tell the tale seemed like a more realistic goal at this stage. 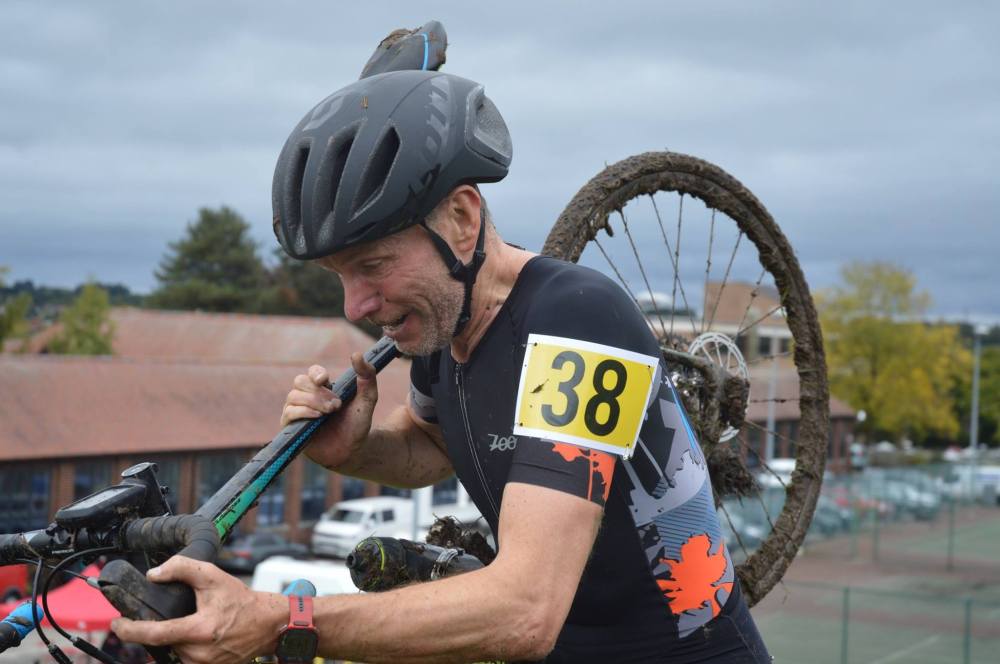 Somehow I got through the technical section without causing anymore damage to the other racers, but I did block the route a few times as I lost my balance and ended up in brambles and undergrowth. Once back out onto the open section we headed up hill and my strength became an advantage. I started to overtake people as the first lap ended and this gave me a bit of confidence. With confidence came the ability to assess what was happening. I broke the course down into sections, some of which I could attack full gas and others where I needed to take it steady. As the laps went by I also began to learn how to ride through the thick sticky mud. It needed to be attacked with a high cadence in a straight line. As each lap went by I went quicker and quicker and was definitely making my way through the field. 60 minutes went by in a flash and I could now hear the last lap bell. After a very tricky start I’d really enjoyed my debut at cyclocross and didn’t really want it to end.

I crossed the finish line, totally caked in mud, beaming from ear to ear. Cyclocross is such a buzz. I loved it. I’ll be back to do more of the series and can hopefully shake off my Captain Carnage reputation before the season is out!