I was back racing again this weekend after my mid summer break. Grafham Water in Cambridgeshire was the venue and I wanted to use this event as a warm up for Dublin 70.3 in two weeks time. My goal was to perform smoothly through each of the elements of the race, ensuring that I went hard but not so hard that I was empty on the run. I’m delighted to report that my race execution was pretty damn good. It was as good a triathlon race performance as I can remember.

The usual early morning start time for races meant that I needed to go down the night before. Premier Inn did themselves proud with a quiet clean room, comfy bed and TV to watch the World Athletcics champs. The whole evening in the Olympic Stadium was built around Usain Bolt’s last individual 100m and whilst I had a spooky feeling that he wouldn’t win I really did not expect his conqueror to be his old nemesis Justin Gatlin. I felt a wave of disbelief surge over me at the fnish. This was not in the script and whilst I disagree with gatlin being given the opportunity to compete I think his mental fortitude needs to be admired. The real villains in this in my view are the IAAF who fail to create a system where clean athletes can thrive .

My usual sense of outrage at this kind of hypocrisy passed fairly quickly as I settled down to sleep and prepare for my own race the next day.

I slept pretty well and awoke just before my alarm was due to go off at 5am. I like to eat my pre race brekkie upto 3 hours before the gun goes off and within 30 secs of opening my eyes I was tucking into my “Performance Chef “ bircher that i’d brought with me and kept in a coolbag overnight. This has become my staple start to most days and I never get bored of it. Varying the fruit does the trick to keep it interesting. By 6am I was out of the door and heading for Grafham Water.

Sunday was a beautiful morning. Blue sky, cloudless,  and a slight breeze over the lake. Perfect conditions for racing. 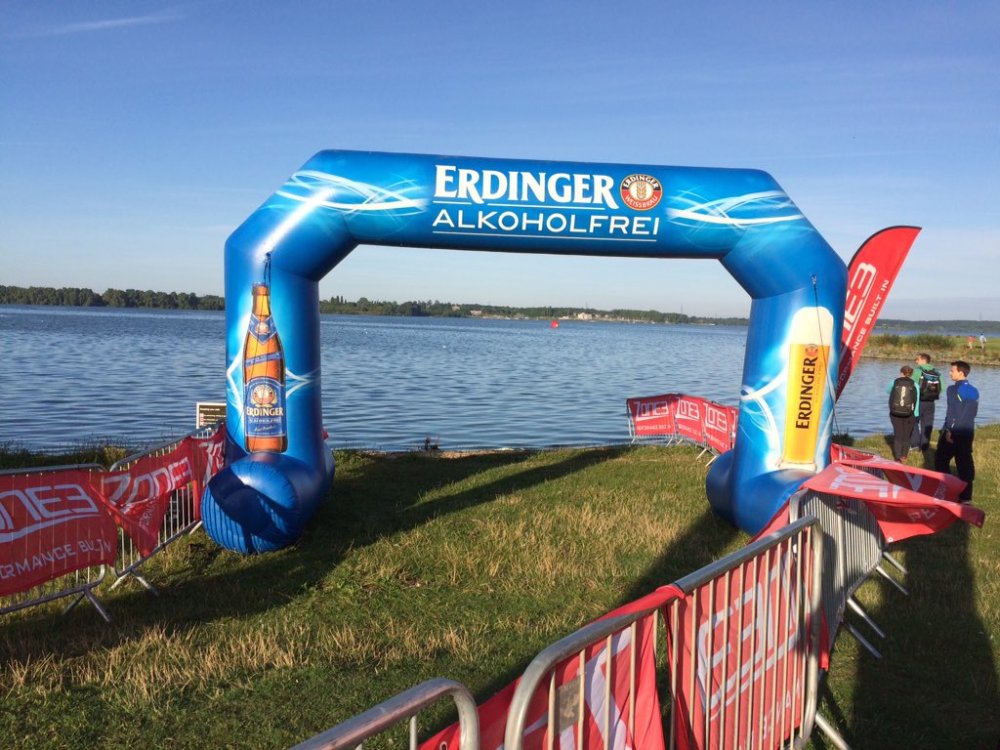 By arriving nice and early I got through registration quickly, strolled back to the car where I put wheels on the bike, checked tyre pressures, gels on board and went through to transition. I had a flawless set up, went for a good warm up jog and was feeling very relaxed and ready for the start.

The only concern I had was that with 650 competitors going off in only 4 waves, the swim start could be carnage. I was in wave 2, all men over 40. This was by far the biggest wave. Mamils were out in force! 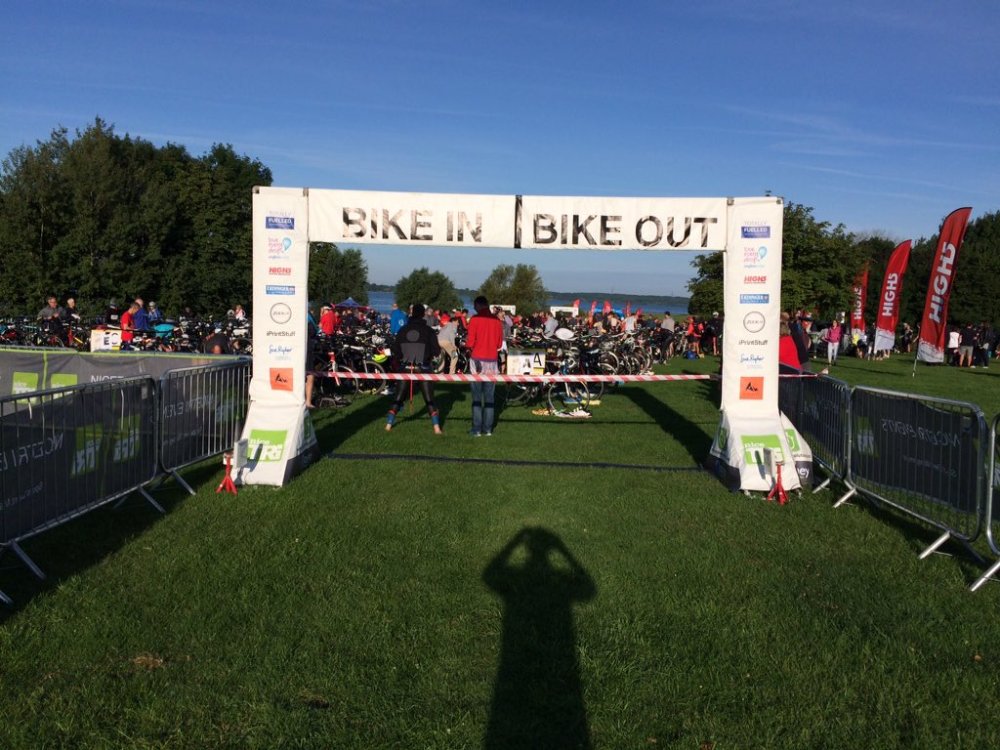 I decided that with my new found swim confidence I was going to take my chances at the front of the wave. I positioned myself on the far left which was technically the outside of the group as we were swimming in a clockwise direction. I chose to go out as hard as I could for as long as I could and just hope that this would help me avoid too much of the human washing machine effect. I got away pretty well held my nerve, kept relaxed so that the stray limbs would slide off me and smashed it for as long as I could. My lungs were burning and fatigue was setting in after a minute or two but I did manage to find clear water. I then took my effort levels back a notch, slowed my breathing down and found a good sustainable rythmn . I’m a left sided breather so was reassured that I could see a few guys outside me and knew that if I could still see them then I wouldn’t need to sight the turn bouy too often as we headed up the lake for approx. 600m to the first bouy. Everynow and again I checked and was reassured to see plenty of orange hats around me. Soon we were heading back down the lake with only one more turn to make and from here it was approx. 150m to the swim exit. A really short run into transition gave me just enough time to get the wetsuit down to the waist ( this new Snugg suit is a joy to get on and off). I was pleased to see that my area of transition was still full of bikes so that suggested I’d had a pretty good swim. It certainly felt that way, but I’d forgotten to start my watch so could only guess at how long. Once out onto the bike I realised that it was just after 0830 and given that we’d started at 0805 that meant I’d flown round by my standards.

I got settled on the bike quickly, was picking people off with ease and had to concentrate over the first section as the road was pretty full of athletes going at various speeds. Just as I was beginning to think I’d made it through the early rush hour traffic, someone about 20m infront of me seemed to go straight over his handle bars for no apparent reason. I swerved, missing competitors coming the otherway and took it a bit easier for a few minutes. Its amazing how quickly a slightly different intensity can begin to feel normal and I was jolted out of my comfort zone by a couple of atheltes going past me. I never like this and so it made me realize I needed to push on harder. It was really fast course, with good road surfaces and very few potholes ( but poor old fellow Erdinger athlete Garry hit one and blew his back tire…race over, sorry Garry). I was now working really hard and picking off riders with regurality. It was a pretty flat track so it was big gears all the way. I took on a second gel a few miles before the end of the bike leg to set me up for the run. I remember thinking at this point that my legs were tiring but my head felt pretty cool. I was triallng my new Scott Cadence helmet and it did seem to be regulating my temperature much better. I knew I’d gone hard and so wondered how the legs would feel over the 10k run. The answer was pretty good thanks.

As I came into T2 I scanned the area and noticed that it was totally empty. There did not seem to be a single bike in my section. “Maybe I’m leading” I thought. This would prove to be an important error. As I headed out of T2 I heard the announcer confirming that the 1st lady was just going out onto the run. She came alongside me as we headed up the reservoir and I remember thinking lets aim to stay with her for as long as I could. I got in front and began to tap out a really good cadence with short light strides. I imagined she was tucked in behind me and that was fine. At the end of the lake we turned and came back on ourselves so I was surprised to see that I’d put about 25m into her. Keep it going. I was passing people and none was coming past me and this made me think that I was going really well. At the next turn point after approx. 4 miles I”d really put more distance between myself and the 1st lady and managed to convince myself that I was flying. All the external cues were suggesting I was running really well. I was going quicker than the leading lady, I was passing lots of others and none were coming past me. I convinced myself that I was on my limit, but I’m not sure I realy was. I felt a stitch coming on but ran through it ok. With 400m to go I noticed a fella infront who looked like he could be a similar age to me, so despite thinking I could be leading I did pick up my pace to overtake him, just in case. It was a good job I did as he was in my AG and I managed beat him. I looked at the clock at the finish and saw that it was just coming upto 1013. By my calculation that would mean a sub 2 hours 10 time. Wow that felt good.

The Erdinger Alkoholfrei bar was just beyond the finish line, so I had jubilant chat with the team and then picked up my official finish time. I’d done a swim under 25 mins, a sub 60 min bike and a 41 min run for a total time of 2:07:56. I reckon this is my fastest ever Olympic distance race. I was buzzing with excitement. Even the discovery that I hadn’t won the age group but had finished 3rd didn’t bother me. This was a qualifier for 2018 European Championships so had attracted a quality field and this was triathlon and not duathlon where I am used to picking up the odd AG victory or two. In a quality tri I’d never finished so high up. I was hugely pleased and learnt that I mustn’t ever get ahead of myself thinking I might win. The only way to try and achieve this is to give absolutely everything throughout.

I finished my morning by jogging back to the finish area to help out with serving the Erdinger to all the deserving finishers. It was great to see so many satisfied, exhausted faces. The positive energy was intoxicating and it was a joy to chat to so many athletes about their individual race stories as we gave them a taste of the isotonic recovery juice, that is Erdinger Alkoholfrei.

After the frustrations of my first two “A” races this year it is a real confidence boost to head towards my 3rd biggie with such an encouraging performance. I’d put together probably my best tri race to date. Lets see if I can build on it in Dublin in two weeks.