This weekend I will be running a marathon for the 1st time in 8 years and its 26 years since I ran my first one. Back then, I don’t remember using gels, nutrition was a few jelly babies being handed out in the crowd and a tray of bananas at about 18 miles. Oh how times have changed.

Manchester will be my 8th marathon, but the first where it hasn’t been the focal point of my sporting year and so it will be lovely to take part in a huge event where I’m not putting myself under any pressure to perform. I just want to relax and enjoy the wonderful human experience that marathon running provides.

Ever since my introduction to the marathon at London in 1991 I’ve been captivated by the way that these events bring out the best in people. Runners, spectators, volunteers all come together to support each other towards the achievement of some pretty amazing things. At its most basic level a marathon is a celebration of being alive, of health and general fitness. Beyond this its a brilliant way of inspiring people to achieve extraordinary feats, to encourage us out of our comfort zones and its also grown into an important occasion for charities with millions being raised for great causes.

Back in 1991 I was naïve, young and very fit, being a footballer at the time and had no idea what I was letting myself in for. I breezed through the event in under 3 and half hours, soaking up the amazing atmosphere the whole way, comparing it with coming out of the tunnel at Wembley Stadium on Cup Final day, except the noise went on for 26.2 miles. All the sport I’d done until then had been highly competitive so I found the camaraderie of the marathon really refreshing. 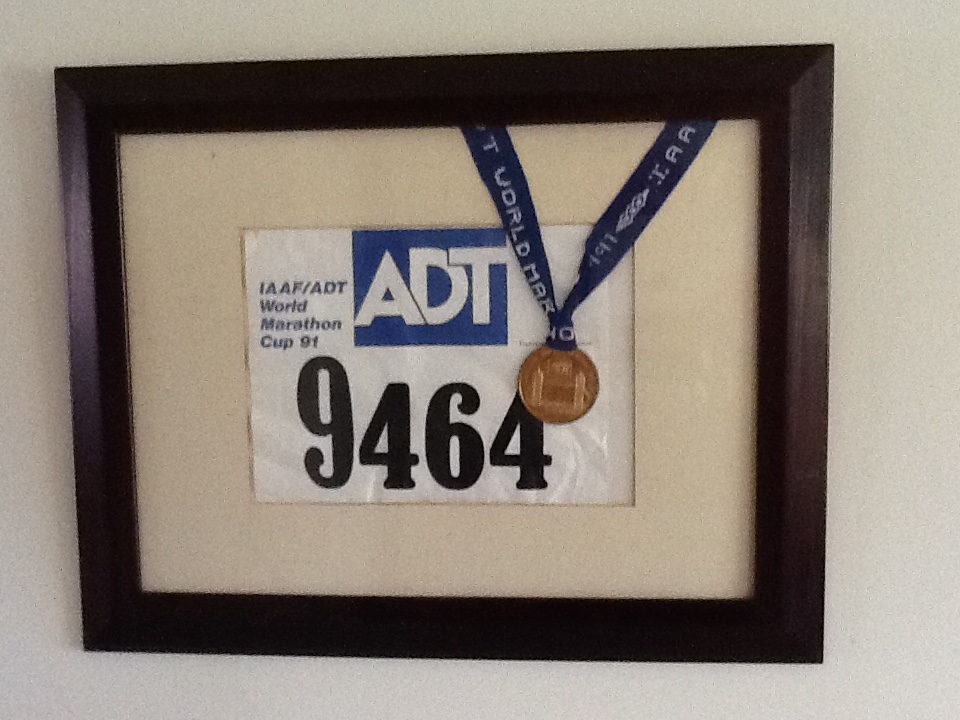 I enjoyed it so much that I thought I’d like to see how fast I could go with some dedicated marathon training. Luckily I got a place in New York City marathon 6 months later. I spent the whole summer preparing, then only managed to shave what seemed like a miserly 3 minutes off my time. This seemed like a small reward for a huge amount of effort and a seed was sown in my head that I should be capable of going quicker.

Little did I realize though that 3 hours 25 minutes would remain my PB for at least a quarter of a century.

My 30’s almost disappeared in the blink of an eye before I was ready to try again. This was a period of working really hard to build my career and learn how to be a dad to two beautiful sons. Every minute was taken up with important stuff connected to these priorities and so my sporting ambitions took a bit of a backseat. Becoming 40 was on the horizon and whilst I reject (far too vociferously I can hear my wife saying!) that I had a problem with reaching this age I was clearly keen to prove that it did not mean that I was slowing down. Running a marathon again seemed like the perfect way to show that I was fitter and faster than ever.

Our best mates were living in New York and so we celebrated reaching 40 by heading out there again for the Marathon. Preparations were really frustrating as my body was letting me down. Calf and Achilles were the problem. I’d get over one niggle on the left and then because of overcompensating on the right, this would then go. Looking back and knowing what I now know about the importance of a disciplined recovery regime of stretching, foam rolling, massage I’m not surprised I had problems. Time seemed so precious that every minute was in demand, so I squeezed in runs around other stuff and simply didn’t ever see that recovery could be given priority for a single minute of my time (that is until it became chronic and I was rehabbing under the guidance of a physio). I couldn’t run for the last four weeks leading into the race, but there was never a question that I would pull out even though I knew I was underprepared as I stood on the start line. Surprise, surprise, I really struggled but was very proud of the way I dug in and somehow finished in just 30secs over 4 hours.

I was determined to come back the next year and give it another go when I hoped I’d be in better shape. 2000 was definitely an improvement as I crossed the line in 3hours 35minutes. Not bad, I thought, but I still felt there was a better performance inside me. Three years later in 2003 I was back again for one more shot at New York. Once again I struggled in the build up with the same injuries, tried all kinds of remedies, tried orthotics but couldn’t find a way of being able to train consistently. Frustratingly my calf failed during the race and I hobbled through the last 8 miles to cross the line in 3hours and 50minutes.

Despite all these frustrations, my love of the marathon grew stronger each time and I now wanted to try another of the Marathon Majors. I set my sights on Chicago in 2005. Consistency of training was still an issue due to these niggling injuries but I did manage to get around in one piece and showed some improvement with a 3hours and 37mins result. I loved Chicago and wanted to go back again.  We did, to celebrate my 50th in 2009. This time I knew I was in great shape, injury free for the first time since the days of 1991 and ready to set that PB. If I could do it I’d have been so chuffed to show that you could be faster at fifty than thirty. However, on the morning of the race I woke up with a terrible tummy bug that caused me to pay lots of visits to the portaloos dotted around the course. Despite this inconvenience I finished in 3 hours and 27minutes, beat my time from London all those years ago and only just missed out on my original NY time. So I was faster than the first time and this made me very proud, but I still left a tad frustrated that I didn’t have the new PB to show for it.

Since 2009 I’ve discovered duathlon/ triathlon and this has become my passion. As I head towards Ironman I’m aware that the challenge of the marathon is still there and I will need to be able to cope with the demands of this event at the end of a 2.4mile swim and 112miles on the bike.

So this weekend in Manchester it’s more about reassurance than it is about that PB of 26 years. I know I’m in good shape and I want to run a race that leaves me feeling really positive, knowing that I can execute this distance well and that my body will easily cope with it.

So my race goals are to run an even pace, to relax and enjoy the experience by chatting to as many other runners as I can. To achieve this I plan to join the 3:15 pace group and stay with them until around 20 miles when I can re-evaluate and decide whether I need to back off, kick on or hold firm.

Lets go do it.