Race day arrived and I woke having slept relatively well, which I interpreted as a good sign. I felt calm and ready. It was almost time for the big test of the World Championships again. A pre breakfast jog confirmed that my legs were ready to race. No heaviness or fatigue. “Steal springs” perhaps, but I’d be deluded if I felt I’d be able to run at the speed of a leapord like that character in Gallipolli….maybe a 57 year old leopard though!

Our taxi arrived on time and he found his way around all the local road blocks easily, delivering me to the race start area in good time. All the variables that were out of my control were now behind me. Everything was going well. Surely it was going to be a brilliant day.

I checked my bike in transition, pumped up tires, fitted bike shoes and my set up was done. Warm-up was completed and I was ready to go. The usual nerves started to kick in as we were called to the holding pens but it was excitement rather than fear that I was feeling. 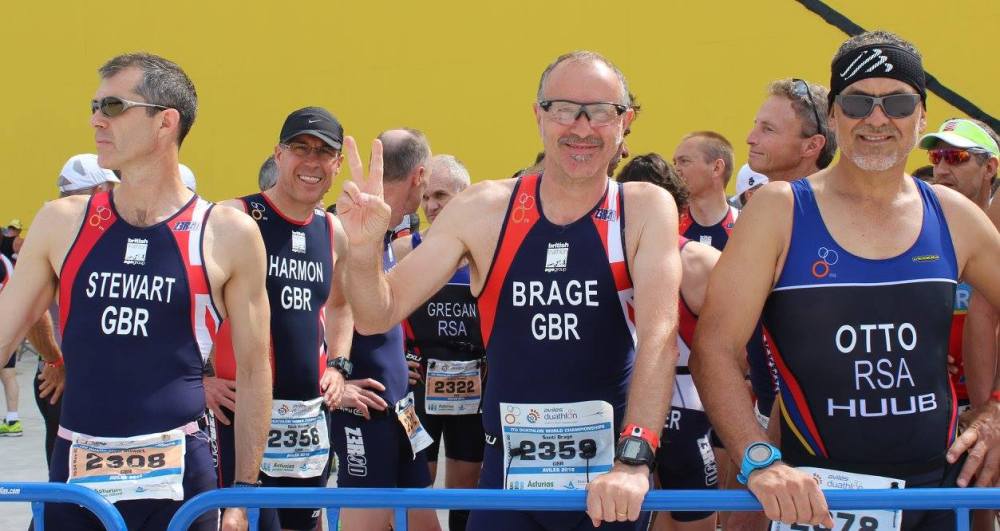 The start gun fired and we were off. I felt alive and the huge crowds were inspiring as we ran through the main arena and out alongside the river. My stride pattern was good and it felt like I was running well but I think in the excitement of the event I went off a bit too fast, even though it didn’t seem that way at the time. After the first half lap (of two) a number of guys in my AG started to come past me and by the time we had reached about 8k I was down in 12th/13th place. This was not where I’d expected to be, but ok, I’ll have to fly on the bike to get back into contention. 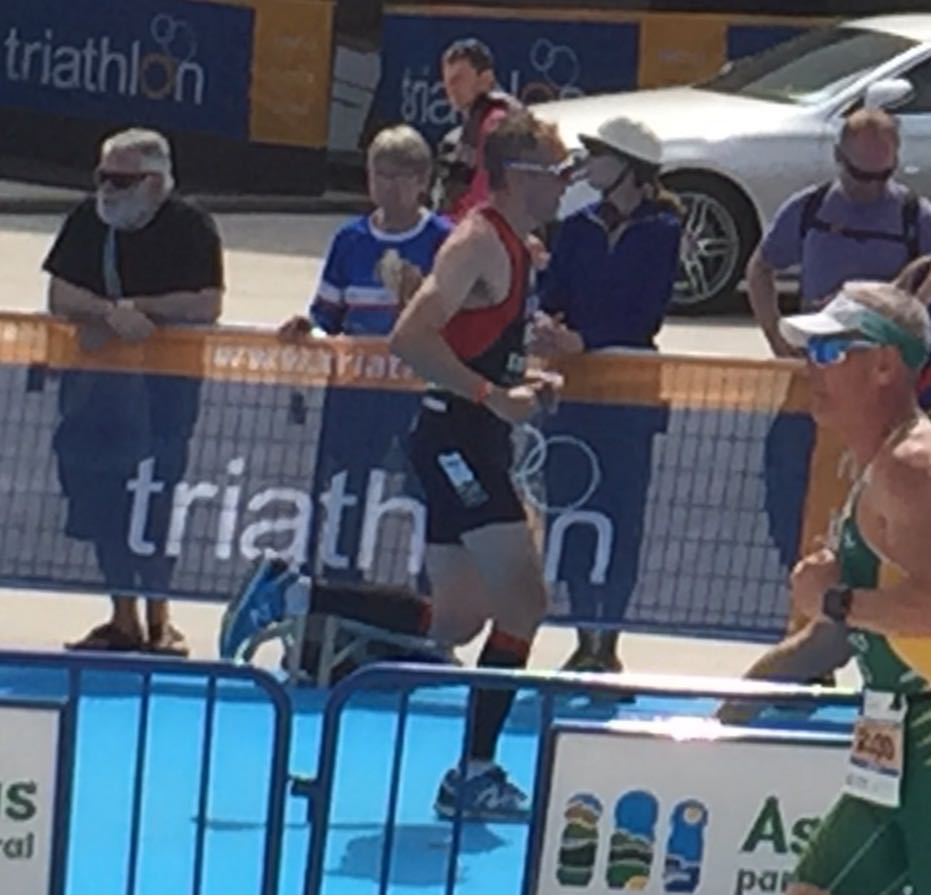 During the last 2k back to transition I worked hard to hold my position and keep calm. Once I got out onto the bike I felt great. I got into my rhythm really quickly and began reeling in the faster runners. By the time I reached the foot of the one hill on the course after approximately 10k I had two quick Americans in my sights. I went past them with relative ease and felt this surge of excitement. I was now definitely back in the race and over the next 30k I could really impose myself. Down the other side of the hill I went, taking a moment to recover and then I noticed one of the Americans come past me again. Rather than letting him get into the sharp corner at the bottom first, I stupidly decided I wanted to show him who was in control and I pushed on and took a more aggressive approach into the corner.

Instantly I realized this was a mistake. I was coming into the corner too quickly and hadn’t given myself enough room. I hit the brakes hard to take some speed out before I needed to turn, but I hit them too hard, the wheels locked up and I was sent head first over the bars. I think I hit the ground first hard on my right hip and then somersaulted forward on my back before springing pretty much straight up onto my feet. At some point in this action my shoes came free from the pedals and the bike went in a different direction and thankfully didn’t cause anyone else to crash. I would have been even more disappointed if I’d ruined anyone else’s race.

My world stopped for a second or two. The huge crowd gathered at this corner took in a collective deep breath. I was dazed, confused, in a state of shock. I couldn’t understand what had happened and was frozen to the spot. As I turned around and saw my bike the crowd began to cheer. It was lying in the road and I went over and picked it up. The wheels seemed to be running freely. The handle bars seemed straight and aligned properly. The drivetrain was intact. The bike seemed ok.

My body was screaming in pain, especially my hip and back but I instinctively got back on and started gingerly peddling away. With this, the crowds went crazy. Under the direction of the local PA system they started chanting my name. “Hollins, Hollins, Hollins” was ringing out right along the waterfront and I was overcome with emotion as I slowly rode away, confused about what happened and what to do next.

My first thought was that my race was now over. I couldn’t get back into contention after such an horrific crash and so I’d ride back to transition to retire. A motorbike came alongside me and the rider was concerned for my health. He tracked me for a few minutes before I reassured him that I was ok to make my own way back. I then remembered I had a gel on the bike and so I took it. This helped to calm me down and as I slowly rode the 7k back towards transition I took my awareness around my body, checking out the physical situation. Apart from my hip that was thumping with pain, the rest of the body seemed ok. Only a few months ago, id experienced a similar hip pain on the left side ( another bike crash!!) and knew that riding hadn’t caused any further problems on that occasion. So my thinking began to change. I decided to complete the bike course and then see how I felt when I tried to run. Its not everyday you have the honour of competing in a world championship and so I wanted to give my all.

I set off on lap two, with a view to simply enjoy the rest of the race. I might not win but I was going to relax and soak up the awesome atmosphere that was being generated by the combination of team supporters and locals who were out in their thousands to cheer on the athletes. Once I relaxed, I found I was riding strongly again and soon began overtaking lots of other competitors. As I approached the infamous corner on the second lap I went into it much more cautiously. To my surprise the crowd recognised me instantly and the cheering and chanting  “Hollins, Hollins, Hollins” began again. I was overwhelmed by their support for me and this certainly endorsed my decision to continue. I pushed on further. By the time I approached T2 I could see that I had re caught a number of guys in my age group that I had overtaken prior to crashing out. This gave me a renewed sense of purpose. I was going to finish, even if it meant walking the last 5k. The moment of truth arrived at the dismount line. Was I able to run? Good news, the pain through my hip did not stop me from running and so I went through the long transition with the bike, changed into my run shoes and set off.

As I came out of T2 I saw Kathy and decided to tell her that I’d crashed just in case she was concerned about why I’d been so long on the bike. The fact that I was running should reassure her that I’m ok, was my reasoning.

I took it easy over the first kilometre or so and then realised that I was running ok and so pushed on. I think my 2nd lap was quicker than my 1st and as I ran back towards the finishing arena I could see a number of athletes ahead. I began to pick them off and managed to overtake at least one guy in my age group.

I crossed the line feeling hugely proud that I’d battled on to finish the race despite the crash. I thought I would perhaps finish in the top 15 after all the time I lost, so was totally chuffed to discover that I finished 8th. A top 10 finish in the world championships after crashing is probably as good a performance as in any previous championships when I’ve been lucky enough to win medals…..and its certainly a performance that I’ll never forget! 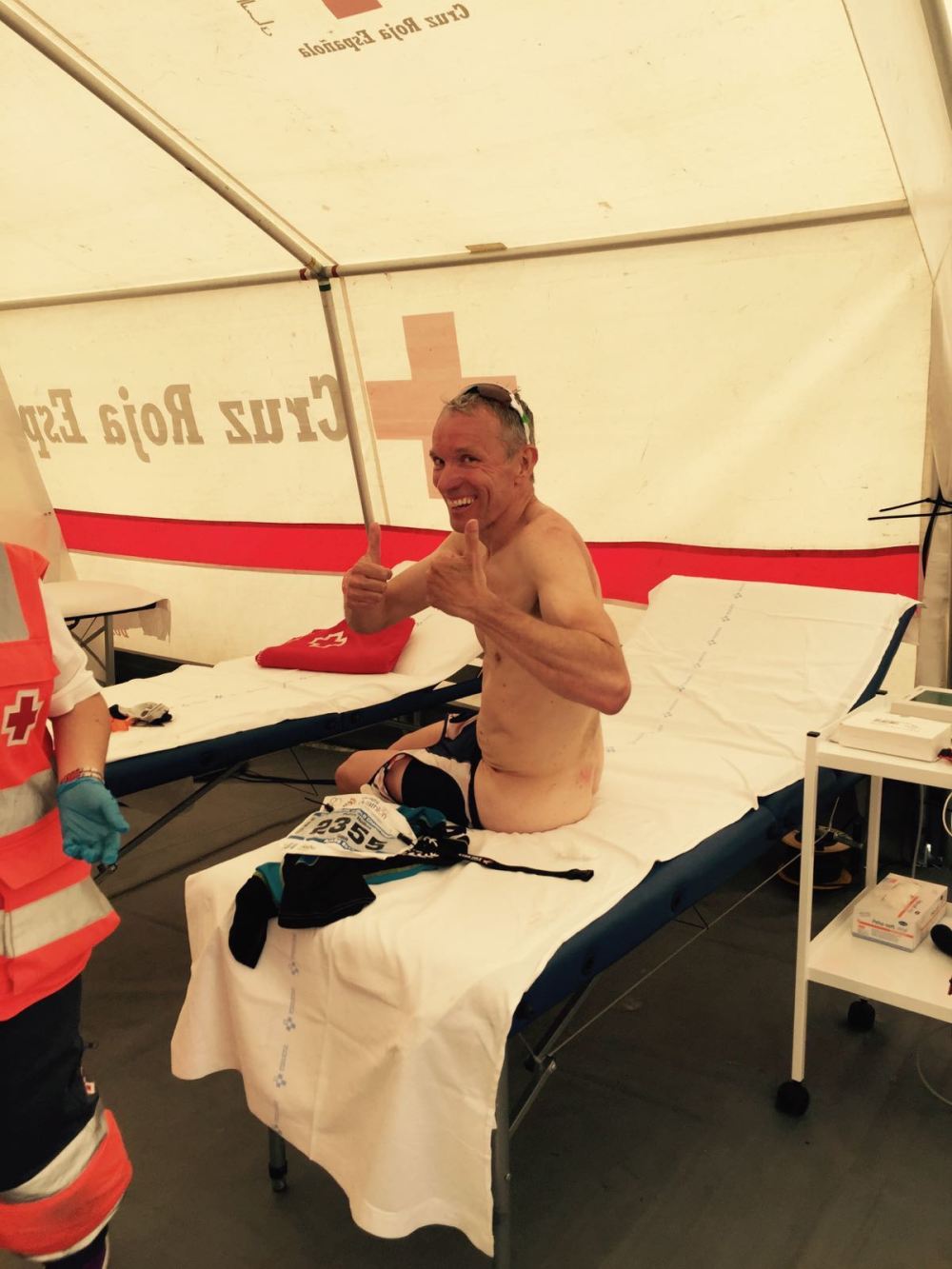 What did I learn?

Its crucial to stay calm and “in the present” at all times when racing. I allowed myself to get overexcited by the fact that I was reeling in those competitors in my AG that had run faster than me. In less than 10k I’d gone past at least 6 and knew that I was capable of putting myself into a medal position by the time I got off the bike. However, I made a huge error and took too much of a risk going into that corner. I knew the corner was there, I knew it was a tricky one to negotiate and yet I simply failed to give it the consideration it deserved because I wanted to get through it ahead of one of my American rivals. The reward for doing this would have been negligible and given I’d already made up more than 30 secs on him in 10k, I was surely going to put much more time into him over the next 30k of the bike leg. But in the heat of the race, I didn’t think straight and was too aggressive going into that corner.

So the 2nd bit of learning is about risk-reward. The rewards for taking risks need to be significant to even consider taking them. If not, back off.

And finally. It’s never over until it’s over. To get 8th place finish, less than 1 minute behind 5th after all the time lost and the damage done seems pretty remarkable and acts as proof to me that I should never give up.

I’m going to take a week off racing now and give myself time to recover properly before building up to the next biggie of the season which is a trip to Sweden for Jonkoping 70.3 in July.

My thanks as ever to my amazing wife Kathy for her love, support, patience and selflessness. Also big thanks to everyone in Aviles and ITU involved with organising this wonderful event, Jez Cox and his team, plus the whole of the GB team for creating such a wonderful team spirit.